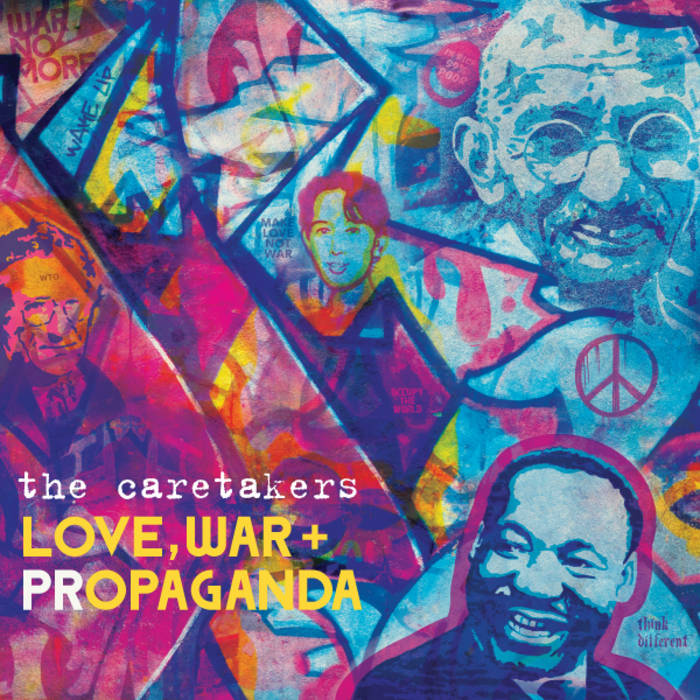 Even upon first listen, The Caretakers demos for this new record were a flurry of the familiar (The Poppy Family, Leonard Cohen, The Mamas and The Papas - Lou Reed rubbing shoulders with Dolly Parton), with a vibrant flair for the original, all of it filtered through two of the most unique and natural voices in modern popular music that I can think of. None of that idol-swagger or indie-rock caterwaul, but both possessing the honest delivery of a master raconteur. Lena’s soulful Zydeco holler from a time before microphones, and Jeff’s plaintive everyman croon, blend seamlessly and create its own voice, perfectly demonstrating the principle of yin and yang.

Not all of the songs are concerned with social issues, but many do touch on them, hard... while others side on the deeply personal (which are, after all, social issues under a microscope). Each song walked in with its own distinct attitude, and I've tried to let them leave with their disposition intact.

Having grown up on 70s AM radio, where Lou and Dolly made perfect sense rubbing shoulders, Jeff, Lena and I can all appreciate diversity in sets of music. Sit back and flip through the channels of "Love, War and PRopaganda," courtesy the Caretakers.

This album is dedicated to the 99% of the world population still waiting for a piece of the pie.

Track Name: 37 Days In Jamestown
Is anybody out there?
Is anybody listening?
Are you looking back to see
Wond'rin' who or what it might be?
Thirty-seven days in Jamestown
Where are the Saints?
When are they comin' around?

Cries in the courtyards
Cries from the corridors
Where did the wild thistles grow?
Or was that such a long time ago?
Thirty-seven days in Jamestown
Where are the Saints?
When are they comin' around?

Why can't it be Christmas every day?
Why can't the sun shine our way?
Tell me how you feel so afraid?
Why does it have to be this way, and I say

Where will the children learn to play?
When do old wounds heal and fade away?
Tell me why you give them any time of day?
Why still live yesterday today, anyway

It's just like California
When you smile
It feels so good, it feels so great, It feels so fine, every time
On a hot summer San Francisco night

Feels just like California
It's all right
I'll hold my breath, I'll hold you close, I'll hold the line, we'll be fine
Down the Pacific Coast Highway drive tonight

It's just like California
In our minds
We're gonna walk, we're gonna run, we're gonna fly, so high
In those sun-drenched Santa Monica skies
On a hot summer San Francisco night
Down the Pacific Coast Highway drive tonight
Track Name: On Becoming Noam Chomsky
He learned about freedom and forgiveness from Nelson Mandela
Saw the light of day through the eyes of Martin Luther King
Said it's time to change the way we choose to live our lives today
We have to try a little harder to be kinder or they'll take it away take it away

A master-level poet of language a master poet of life
Body politic of the human mask and the human mind
Socrates for a new world and a new century
Defender of freedom of words for all humankind, for all time

They're manufacturing consent and manufacturing bestial lies
Too kind for the mainstream media a true legend in our own time
Caught at the edge of truth and dissension forbidden thoughts between the lines
I heard him talk about the human condition and human rights, human rights

In good and evil do we trust
So much propaganda so much disgust
So much complacency and so much shame
Blood and honour on a death-bound train
Track Name: I'm the Happiest Man
Despite all the misery
I’m the happiest man you’ll ever see
Looking back in history
It’s the luckiest time there could ever be

No one’s here ‘til eternity
Better start movin’ one two three
Money don’t mean much to me
Cause you’re the very best thing that’s happen to me
Looking back in history
It’s the luckiest time there could ever be
Despite all the misery
I’m the happiest man you’ll ever see
Track Name: Killing Me, Killing You
Make love not war
Have breakfast in bed
What’s it all for
You’re no good to any one dead
Live and let live
Lend a helping hand
You don’t have to forget
But you have to forgive or

One step forward
Two jumps back
Don’t matter what you roll
You’re game’s so off track
What is truth?
Who are enemies?
Love thy neighbour
Meant a lot you see, now are you

Love is there
And love is gone
Love sometimes pretends it's just a song
Love is right, but it can be wrong
Sometimes love lasts only dusk ‘til dawn

Love is good
And love is peace
There’s no time for war hate or greed
Love is here and love is now
Yesterday love was on the in and out
Track Name: Northern Rain
Northern rain
Northern August afternoon summer rain
Coming down all around me
Nothing but the sound of
Pitter-patter, for one moment in time nothing
In the world seemed to matter but the Jack Frost Pine
Been 'round here since Tom Thompson's time
So much appeal for Canadian Shield
It's a Toronto boy's Achilles' heel

Northern rain
Northern early evening breeze summer rain
With your cold steel grey
Break the chains that bind us
Wash away a poor boy's troubles
To life's everyday day-to-day struggles
For one moment in time
A momentary lapse of peace of mind
Leave city life so far away
Oh so far behind baby all the time
Track Name: Left A Friend Behind
Drove through threads of lightning
It lit up farms and fields
My baby in the backseat
You behind the wheel
Dylan's singing angry words
Mosquitoes got me good
Hair went curly hours ago
I'd turn back if I could

Left a friend behind today
Who had me solved inside a day
Kindest spirit, strongest heart
Who led me to a brand new start
Track Name: Oh Banyarwanda
Many tears have fallen ghosts still a callin' it’s gonna haunt ya
But school bells are ringing and everyone’s singing Banyarwanda

Famine and feast, disease and deceased, I'm so sorry
Humanity caved, no one was saved, no Joshua story
Women and children one hundred days of killing so unholy
Just like the forties a never-ending story so chilling, so gory